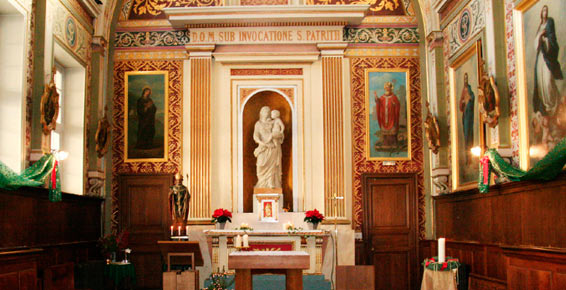 Our Chapel is one of the hidden treasures in Paris. People who wander into our courtyard often delight in the beautifully quiet space of the garden. Under the names of 18th century dioceses, the old cloister forms a very contemplative space in the busy City of Lights. However, once they walk in the doors of the Chapel, they are often blown away at the gentle sense of the presence of God, the echoes of history in the silence of the space, the ‘smell’ of the prayer of countless numbers of young and old who came through these doors to worship God and to seek his presence.

The backdrop to the Altar is a very beautiful statue of the Blessed Virgin with the Child Jesus in her arms. It seems a little strange that the statue of the virgin should stand over the Tabernacle, but it is possible that this statue was taken from the Collège des Lombards, when the Irish finally left there at the beginning of the 19th century. The Irish students maintained a sanctuary to the Blessed Virgin in the Collège des Lombards. Whether or not this is the statue that was in the sanctuary there, it is heir to that very long tradition of Irish veneration of the Blessed Virgin in Paris and before this statue would have prayed many of the great figures of our history, Daniel O’Connell, Karol Wojtyla, among others.

The Chapel still has the Choir seats that would have been typical of the seminary. The students would have chanted the psalms from side to side during their offices. It allows for a good space in the centre which gives a very uncluttered view of the Chapel. On the wall to the right, over the seats, are a series of paintings that probably date from the 19th century renovation of the Chapel. These depict , starting from the one nearest the Altar, the Sacred Heart (of enduring appeal in the decoration of Irish homes until recently and important in terms of counteracting Jansenism in theology), the Blessed Virgin Mary (with cherubs bearing shamrocks at her feet — some say that a tricolour is hidden in the painting, see if you can spot it!), Saint Joseph and the child Jesus, Saint Vincent de Paul (founder of the Vincentians who ran the Collège for much of the 19th century), Saint Francis de Sales (a good friend of Saint Vincent de Paul and a model for diocesan clergy, who would have been formed here) and finally Saint Thomas Aquinas (the patron of theologians). With the exception of the painting of St Thomas Aquinas, the paintings are not signed. They are supposed to be the work of a 19th century Vincentian artist who live in the mother-house on the rue de Sevres. The last painting, which is stylistically more flamboyant than the others, is signed and dated, purported to be the work of M Duckett in 1879.

All over the Chapel, one finds the initials SP (for Saint Patrick) in the midst of the golden and red intricate designs. The entire Chapel was restored in the restoration of the Collège at the beginning of the 21st century. During the restoration, the specialists found the remains of over twenty lairs of painting. At the back of the Chapel there are two tribunes (commonly called the Nuns’ Tribune and the Rector’s Tribune). In the space between these two tribunes are depicted the cardinal virtues and also an image of a dove depicting the Holy Spirit.

One thing not to miss is the only stained glass window, high over the Altar. It is a very beautiful depiction of the Lamb. It is an image based on Apoc. 14, the image of the Triumphant Lamb. In a strange way, it might be the most important image in the Chapel. In this place hundreds of young men prepared ‘to follow the Lamb wherever he goes’. It is still a reminder that those who come here to pray and to participate in the Liturgy are following in the Christian tradition of those who came before them.

Times have changed, this place has seen huge challenges and difficulties but it continues to be that which those who built it hoped it would be, a place of prayer and worship for a pilgrim people in a land far from their own….

If you get the chance to visit, spare a thought for those who would have passed through these doors before you. Young Irish men came here and went on to be the ‘soldiers, priests and scholars’ that had an impact on the history of Ireland and of France. A young Polish priest prayed here when he came to Paris to learn French and went on to become Pope John Paul II. Others have passed through here, Irish people and those of other nationalities, to find a place of prayer and friendship in this city. This is our heritage and we hope to preserve it and enrich so that it might be passed on to future generations.