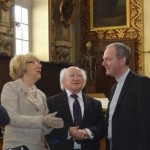 He was greeted at the door of the chapel by the chaplain to the College, Abbé Seán Maher. He stopped to admire and to ask about the memorials to the founders and benefactors of the College to be found in the vestibule. On entry into the chapel, the President seemed delighted to see the beautifully preserved interior and to be informed of some of the very deep historical significance of the different aspects of the chapel. As it was a very sunny morning, the one stained glass window was very beautifully illuminated and the natural light had a very meditative effect. The President seemed genuinely delighted that the chapel was still a place of worship and continued the tradition of an Irish Catholic presence in Paris. 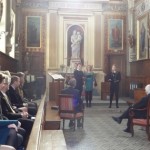 The entire party was invited to a moment of reflection. During this time,  Lena Henessy, Grainne Hawkes and John Devlin sang the Deer’s Cry, accompanied by Kieran McCarthy. It was followed by a moment’s silence and a prayer of blessing upon the President in the name of all those who continue the tradition of worship in the College.

The President proceeded to the Salle de Conférence, where he gave a final discourse and he remarked the beauty of the music and the profoundly spiritual experience it had been to have been afforded a moment of reflection in the sacred space of the chapel. He paid tribute to the community of the chapel who continue the unbroken tradition from the founders of the College.

The Chapelle Saint-Patrick is home to the Irish Chaplaincy which continues the centuries old Catholic presence on the Montagne Sainte Genevieve. Each Sunday the community gathers at 11h30 to celebrate the Eucharist. The Chaplaincy has a strong culture of hospitality and welcome and, in the President’s visit, there was a sense of the mission of the Chaplaincy being honoured, fulfilled and renewed by the link with our homeland.

We invite you also to visit the Gallery to view pictures of the President of Ireland Michael D. Higgins visit to the Collège des Irlandais.