During Lent the Irish Chaplaincy of Paris will be supporting the Trócaire Lenten campaign. For 39 years the Trócaire box has been a part of the Irish tradition and is one of the oldest and most established fundraising campaigns in Ireland, which raises approximately €8 million to fund Trócaire’s long-term development programs. Trócaire works in 28 countries across Africa, Asia, Latin America and the Middle East.

This year sees the 40th anniversary of Trócaire – the official overseas development agency of the Catholic Church in Ireland. Trócaire was founded in 1973 by the Bishops of Ireland to express the concern of the Irish Catholic Church for the suffering of the world’s poorest people. Since 1993 Bishop John Kirby of Clonfert has been the Chairman, while Justin Kilcullen has been the Director.

Trócaire’s vision and mission is to ensure that the basic needs of peoples are met, regardless of race, gender, religion or politics. They enable people to live their own lives with dignity and ensure their rights are respected by others and by whom they are governed by.

Trócaire addresses the causes of poverty, lack of food, human rights, gender equality and HIV. It works with local partner organisations that understand the challenges faced by communities in the hardest hit regions of the world. And it strives to educate and inform the Irish public on issues of global justice.

Trócaire’s mission has always been to the forefront of the organization. This was seen during the time of apartheid in South Africa. Trócaire funded human rights movements and trade unions, while lobbying the Irish Government to condemn the apartheid regime.

Nelson Mandela years later, thanked Trócaire: “South Africans have a long association with Trócaire, who have not only been staunch opponents of apartheid but have also initiated and supported projects in South Africa since 1977.”

This Lent, Trócaire’s focus is to help and support a small community in Odisha in eastern India. Trócaire’s works to tackle poverty and marginalisation amongst some of the poorest and most excluded communities in India. 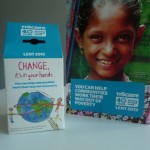 Every Sunday during the Lenten period we will be collecting money after Mass for Trócaire’s Lenten campaign, so please look out for the little Trócaire box when you are drinking your tea or coffee. We ask that you give as generously as you can afford.

With your kind help Trócaire will be able to continue its work of making a substantive difference in the lives of the poor and under privileged in India (and in other countries) that have the greatest needs.

To find out more about its work visit the Trócaire website